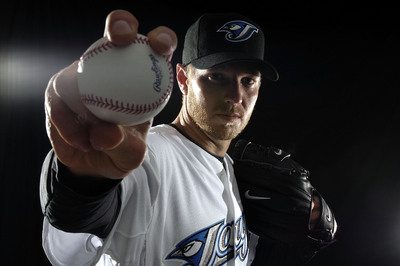 Am I sad to see Cliff Lee go?  Of course.  Despite a slight dip in his performance at the end of the regular season, he was standing tall once the playoffs began, and I found his attitude to be about pitch-perfect for this town.  Not a diva, not a headcase, just a guy.  So, of course, I would have wanted him to stay on the team, but, in the bigger picture, it didn’t make sense and Amaro made the right call.

The talk was that Lee had always wanted take his shot at free agency.  I don’t know much about the guy’s background, but he just doesn’t seem like he got into this game, when he was a youngster, just for the money.  When it became clear that he could pitch at a very high level and even win a Cy Young, I’m sure he realized that this was a moment where he could take care of his family for the rest of his life, no matter what .  All he has to do is be smart and seize the moment.

And Lee has already won in the playoffs.  He doesn’t have a World Series ring, but he’s clearly ready to sacrifice that in order to get financial security for himself and his family.  Which means the Phillies HAVE to move Lee now.  There is no chance that they can pay him after next year, and pay Hamels and pay Howard, and pay Werth, and pay Victorino and pay Utley, etc.  You keep Lee, you commit to breaking up the team.  I want to win next year, but I don’t want to break up the team.

Which brings us to Halladay.  This guy wants to win so much I can taste it.  And he’s already proven that he’s an ace – not a good pitcher, not a serviceable pitcher – an ACE.  Hallady knows that he will never win as a Blue Jay, simply because of the Yankees and the Red Sox.  For the duration of Halladay’s career, those other two teams will always be better and the Jays will never never never make the postseason.

So, Halladay will come here with such a fervent desire to win that he will take LESS money than he can get elsewhere.  That’s pretty much an offer that Amaro can not refuse.

And for those who want to see Cole Hamels shipped out of town, I can only say this:  I would not feel comfortable with the Phillies moving Hamels anywhere closer than Japan.  Even in the American League, I have no doubt that trading Hamels would come back to haunt us somehow, and, if he were to end up in the National League, you could count on him skinning us alive a few times per year.  I don’t know if he can get his shit together, but I know that he can’t have the opportunity to do it elsewhere because he’s too damn good. 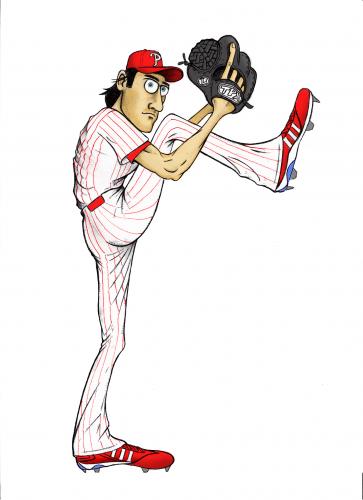 Sports Talk radio will kill you – it will kill everyone.  It has the power to draw a person in with the promise of entertaining moments – SHARED – in-between these meaningless contests of athletic nonsense.  When we ignore everything that is truly connected to human suffering and decency, then we have this opportunity to live in a fantasy land.  As unhealthy as that sounds, the fucked-up unreality is validated by every person in the stands, every family worshiping at the altar of their flat screen TV and every knuckledhead who roams the streets, banging pots and pans, when it all goes right.

Seen in these human terms, what Cliff Lee did for the Phillies and the phaithful in game one of the 2009 World Series, was a gift.  An entire region was transported out of the muck and filth of their mundane and existence as we were told, by no less authority than Joe Buck, how great this representative of our town was.  He was magical.  He was un-hittable.  He made defensive plays in the field that looked other-worldly, bizarre.  And we all got to bask in his reflected glory.

But the true magic of baseball is that it just goes on and on and on and on.  This is often cited as a criticism – “the games are too long, the season is too long, there’s no action, it’s so boring!”  These critics miss the point entirely.  That reflective pace, all that navel gazing, that’s what’s so special.  The invisible game that is played between a hitter and a batter IS the action – and it is all unseen.

And, while there is a full line-up of batters to address, there is only one pitcher.  Yes, of course, there are relievers and closers and long men and even janitors on mop-up-duty, but when we get to THIS moment, where the two best teams face each other, it is the starting pitcher who must rise up and perform.  Cliff Lee’s effort from Wednesday night is a perfect example.

A lot could be said about the hard-luck start that Pedro Martinez mustered last night in game two.  Sports talk radio today has been overrun with opinions about manager Charlie Manuel leaving Pedro in too long and that being the key to the Phillies undoing.  I don’t agree.  Pedro is not a Philadelphian, any more than Cliff Lee is.  The time these men have spent playing in the red pinstripes in negligible.  And Pedro is such a natural at inviting the big moment to come to him.  He will go right into the Hall of Fame and he will forever be remembered as one of the greatest to ever climb the mound.  So, when he said to his manager, “don’t take me out yet, I’m OK,” I understand why that manager, who has made so many right moves this year, decided to let Pedro bring the moment to him, perhaps for the last time.  It did not work out, but the series rolls on (and on and on…)

Cole Hamels has piercing blue eyes.  He is left handed, which gives him a natural advantage as a pitcher.  He has the raw talent to be unhittable, and showed that in his post-season performances last year.  But, for those of us who are bored and foolish enough to listen to sports talk radio (from both the Philadelphia and New York ends of the dial), the story of Hamels is that he is vulnerable, that he is not the same, and that he can be beaten silly by the Yankees lineup.

And while we wait for the game to start, that story is repeated and shared over and over again in this echo chamber of sports fandom.  What does Hamels think?  What does he know of all this nonsense?  Does he listen to the stories?  Does he hear sport talk radio?  Does it motivate him?  Is more pressure better or worse?  No one knows.

Just like no one knows why this year he was not as successful as last.  Was it because he became a huge celebrity?  Is he preoccupied with his newborn child?  Is his public profile to visible?  No one knows.

F1 racing – is getting ready to tear itself apart.  Teams refuse to be subject to standardized technology and budget caps.  To make matters worse, the proposed changes are voluntary, meaning that the 2010 Championship is expected to be a two tiered affair.  I’m very much in favor of some measure of fiscal control on the sport, but standardized technology takes away a key element that is really integral to the tradition and definition of F1 racing.  And a two-tiered championship is absolutely unacceptable.

Phillies – pulled out a nice squeeker tonight.  Hamels gets the win, although it seems he’s not quite as sharp and dominant as he was last year.  Same with Lidge – BIG TIME.  But he did get the save tonight and was a damned entertaining game to listen to.  Franzke is coming into his own (as Scott Graham did, a few years back) on those exciting calls at the end, particularly Lidge’s strikeout for out number two with two on in the bottom of the ninth.  Nice job.

John Scalzi – is a fine SciFi writer, a real professional.  He’s been blogging prolifically since 1998.  That’s some pretty good output for one guy.  Getting the benefit of really good writing on a daily basis is quite a treat.  But when its Scalzi’s twisted sense of humor, well then it’s priceless.  And, hey, it is priceless, totally free!  He recently featured an interview with a stick of butter, and today confronts his inner geek as he contemplates the purchase of a new computer powerful enough to play fancy new games:

As an example of this problem, note the picture above, of CyberPower PC’s “Lan Party Commander.” Leaving aside the name of the PC, which screams “I am encrusted in the residue of Cheetos and Mountain Dew,” this rig is one of the more subtly-designed of the gaming rigs CyberPower puts together, and it still looks like a cooling tower at Chernobyl. If I walk into a room and something is glowing like this thing is, my first instinct is to dive toward the lead shielding.

Read the entire post here.  I particularly like image of him encrusted in the residue of Cheetos.

WordPress – is ready to getting ready to go to 2.8 and only just installed this version (currently I’m using 2.7.1) on March 26.  That’s less than two months ago!  But it’s a dilemna because the last update (that I just installed) was terrific.  Fortunately, it’s still in beta testing, and I’m not feeling that adventurous at the moment. 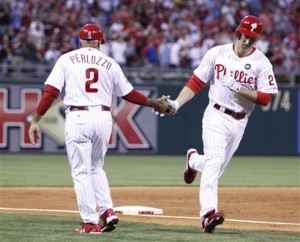 Injuries are cropping up early, especially for Hamels, but the team is on a nice streak of five wins and the offense is monstrous.  We love and miss Pat Burrell, but what Raul Ibanez is doign defies description – I can not remember the Phillies getting this kind of output from the 6th batter! 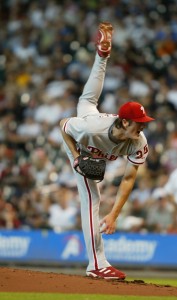 This is the first game of our season ticket plan. Emily is out of town, so I’m going with my Dad. Lots of stuff planned to honor Harry, and then we’ve got Cole on the mound. Let’s see if they can start winning.