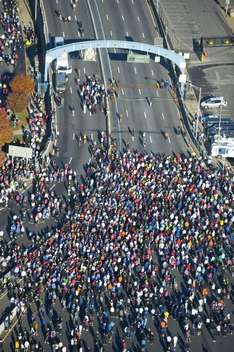 This picture comes from the amazing gallery over at the Courier Post online – check it out! This was a 10K to benefit the Larc School. It took us over the Benjamin Franklin Bridge into Philly and back, then through the streets of Camden, past Salvatore J. Avena’s law office, over by the Battleship New Jersey, and finished in the left field at Campbell’s Field. Em and I worked a nice time (for us, anyway), and it was a beautiful day and a great workout.

For some reason, I want to be a DJ. DJ software is so cool looking and I idolize Amon Tobin and Squarepusher – but it’s not happening. How many parties am I even going to, let alone providing entertainment?

My back ache is mostly gone, thank jeebus. There’s nothing on the calendar tomorrow, so it’s a good catch-up day. I have had Court appointments in Camden the past three weekdays, so it’ll be nice not to run over there again. Arb today was mediocre, but it’s non-binding. I don’t think there’s going to be an offer of settlement in that case.

Time for some more uploads!

I’m in the middle of trial in beautiful downtown Camden, NJ. Before today, I hadn’t updated blogerantz for days. Now I’m sitting in the living room with Lucy and Em; we’re tapping away at our computers and the wintry mix continues to fall on the old air conditioner that sticks out the dining room window, even in the winter. The soundtrack is Neil Young; so a day without sunshine is NOT a day without guitar. If you know where to look, get this record:

Closing arguments will, hopefully be made tomorrow.