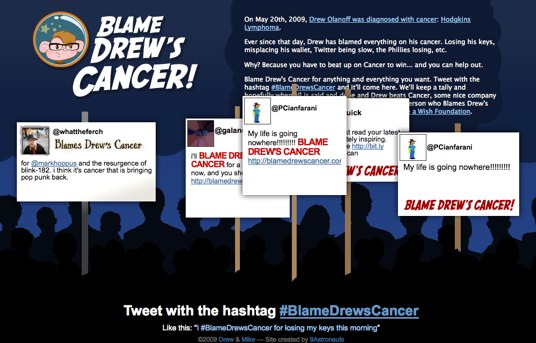 I guess it started this spring, when Andrew Olanoff was diagnosed with Hodgkins Lymphoma.  Well, he’s a Philly guy with plenty of attytood, so he started to lay the rap on cancer for everything, inventing the ubiquitous Twitter hashmark #blamedrewscancer.  Needless to say, it caught on, as it’s f-ing brilliant.  Today was the Blame-a-thon: a 24-hour party at the North Star Bar with co-sponsorship by Taco Bell who sent the taco truck to serve chow to the revelers.  There was also an auction every hour for those tweeting and blaming.  If you follow my Twitter feed, I blamed quite a few things on Drews cancer today.  Strangely enough, I was the winner of the most bizarre prize of the day – a $99 at-home DNA test.  Hey, how about a nice t-shirt or something?!

Anyway, it was incredibly fun Getting swept up in the blame-a-thon.  Everything was the faultof Drew’s cancer, from the fact that the new iPod touch has no camera, to the loss of loved ones taken by cancer.  Over 12,000 different people got in on the act and all the proceeds (raffle tix were $9 and there a cover charge to see bands and party at the North Star) benefit the Lance Armstrong Foundation.   I didn’t make it to the party (busy listening to Obama’s speech), but based on the tweet, there was a lot of fun had by all – in fact, it’s still going on.