Last week, my wonderful friend and gardening guru, Judy, came over to our new house.  It was a saturated, sunless late afternoon, so we were limited to drinking tea, standing in the sun room and surveying the back yard.  I could see the wheels of her mind turning as she scanned the area, thinking of what sort of planting would work in which parts of the yard.  Each time she named another plant or possibility, I dutifully scratched it down.   The months I spent in my old back yard during my illness taught me to understand the healing power of greenery, of planting and sustaining life, and Judy was the person who encouraged and nurtured this love during my darkest hour.

I ended up with an extensive list of potential options, and later in the week, after the rain had finally stopped, I found myself in the back yard, late one evening, as dusk was settling, dead-heading, pulling weeds and turning the soil in the neglected bed that runs alongside our garage.  I re-arranged a few pots that were clearly not thriving in the spots where I’d had them, and the next morning, with the sun actually shining, I believed I could already detect the improving karma.  Then, the next day, Judy emailed me with more suggestions, and I responded by telling her of my efforts the previous evening.  “Small steps,” I reported, ” but I feel like I’m on my way.”

Judy replied, with characteristic pith, “It’s all about small steps.” 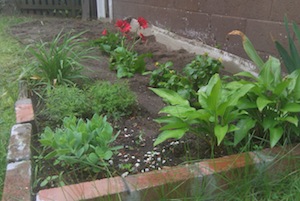 Moving house, finally owning property, settling in – all in the midst of traveling and working, hosting house-guests, planning a housewarming party – has been all about the small steps.  The life that we are building here is potentially limitless, bounded only by our ability to imagine what we want and make it happen.  What I have been feeling in recent days is, in its most basic form, excitement about where these steps might take us.

Excitement, particularly about the future, can be a dangerous and tricky thing for a cancer survivor.  Even now, on the eve of my two year anniversary of completing treatment, I am still wary.  Not as consciously and consistently I was in the immediate aftermath of my illness, but there is that nagging sense of uncertainty that I can never completely shake.  Be buoyant and optimistic, it is as if the voice is telling me, but remember, it could all come unhinged tomorrow.

That may well be the case, but right now, I am telling that pesky voice to fuck off.  Because I am in the now, and life is for living.  This weekend, I was reminded, once again, how insanely true that is.  This weekend I was reunited with two of my fellow campers from Jackson, Bald Fox and Hottie Bucks.  It also provided me with the long-anticipated opportunity to introduce my husband to some of my First Descents family, with completely delightful and rewarding results.  We hosted Bald Fox for the day on Saturday, and then Hottie Bucks joined us for some evening revels, and sitting on our back deck with these three great men, sipping beer, I just wanted to stand on my chair and look up into the skies above me and say, “Thank you, whoever you are, for making me the luckiest, happiest person in the world.”  It just doesn’t get much more alive than that.

First Descents has occupied a huge amount of psychic space for me over the last nine months, and while Mike and I both recognize the tremendous benefit I have derived from this program and the remarkable people it has brought into my life, there have been uneasy moments along the way.  FD has taken me away from home on repeated – and sometimes extended – occasions, and filled my head and my heart with so many souls who are remote and mysterious in the context of my every day life.  At times, it has felt difficult to harmonize the magic generated by my First Descents family with that which I have with my husband.  Needless to say, then, it was heartwarming and gratifying and magical in its own way, to have the biggest and most powerful forces in my life converge, happily, this weekend. 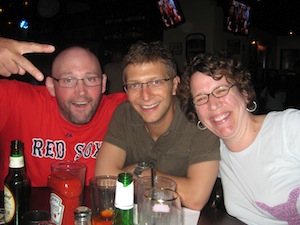 Part of me feels spoiled.  I have been riding this extended high, seeing disparate parts of my life come together, dissolve into one continuous love-fest.  Yesterday, we started off the day with a 5K to benefit conversation of a local woods, and immediately after, received Bald Fox.  He and I then spent the afternoon criss-crossing the city on foot, dodging brief rain showers by dipping into a bar for an unplanned cocktail.  We laughed and shared stories the way only FD-er’s do, and by night’s end, after many more drinks and laughs with Hottie Bucks and Mike, I felt rather like I had been flattened by a love train – the best and most satisfying kind of exhaustion.  It is still not entirely clear to me what I have done to deserve such profound joy.

What might be most poignant about this species of joy is the darkness at its periphery.  At the end of the day, it is cancer which has brought people like Bald Fox and Hottie Bucks into my life, and the truth remains that we have all been tested and tortured in varying ways.  Theirs are stories that I am still just learning, but the common narrative which we all share makes what they have been through – and what we all continue to struggle with – deeply meaningful.

Ours is an enormous, free-wheeling love, the bonds only getting stronger as we continue to build on the connections which were sparked on a mountain-top in late summer.  There will be many small steps – in our friendship, in our respective lives – along this journey, each profound in its own way, each one magnifying the gifts we have been given.  I have never felt so sure-footed.