PERFECTION, or WHAT IS HARD

Last weekend, at the First Descents Climb-a-Thon, our belayer was, quite unexpectedly, a 14-year-old boy.  When the day began, I formed a climbing group with another cancer survivor, her brother and his girlfriend.  I liked them immediately.  There was a toughness, a snarkiness, in this other survivor – traits, I believe, that many of us share.  Perhaps these are traits borne of having endured the very worst.  Regardless, it took no time for that familiar survivor affinity to take root.

As FD campers, we are used to encouraging and supporting each other no matter how messy, awkward or fearful we may be.  We are used to instructors who are patient, intuitive and big-hearted.  What we are not used to is having kids young enough to be our own children (in my case, at least), non-chalantly belaying us, telling us we “got this,” when we hit a snag on our climbs, and asking us, with unthinking reflexivity, if the reason we asked to come down before we reached the top of a route was because we “got scared.”  To be fair, our young belayer was just that – young – and the innocence and naivete of youth are qualities we have all possessed at some point in our lives, and in many ways, are to be treasured.  Still, gathered that Saturday afternoon to climb for ourselves and other survivors, there was something peculiarly unnerving about having a teenager on belay, keeping us tethered as we fought our way upward.

As the afternoon wore on, and our climbs grew more challenging, my fellow climbers and I shared bemused asides as we marveled at the irony of this young boy who had our lives in his hands.  “You’re thinking too much,” he’d say at times, or, as a proposed solution to one of us who was stuck mid-route, “Just do it.”  If only. 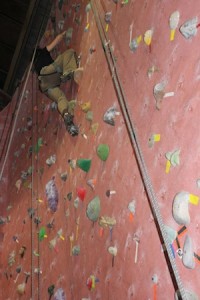 At day’s end, it dawned on me:  how could this boy possibly know what we have seen?  What are the odds that at 14, he’d ever even considered a world where things were unattainable, unfair, painful or Terrifying with a Capital T?  Sometimes, I wanted to say to him, just trying isn’t enough.  Sometimes, sheer force of will isn’t enough to get you past the overhang and onto the next foothold.  Sometimes, there is something real and very scary blocking your way.  And sometimes, you don’t end up raising your arms in triumph.  Sometimes, you are bested.  And depending on the nature of the beast you are facing, sometimes you just don’t make it.

An ornery indoor climbing route is not cancer.  But just as when I was on rock for the first time in Wyoming three and a half years ago, the struggle to conquer that route called up many of the same feelings that marked my experience fighting my disease.  My new survivor friend confirmed the universality of my reaction, as she grumbled about how she would have appreciated more active support and instruction from our young guide, rather than his uninspired clichés and generally blasé attitude about what we were trying to do.  Her grumbling made me laugh: YES, I said. THAT KID HAS NO IDEA WHAT’S OUT THERE IN THE WORLD.  DOESN’T HE REALIZE WHAT WE HAVE BEEN THROUGH?  We were laughing, but we were semi-serious.

In a bit of symmetry, the yoga studio where I practice is this month considering the theme of sickness, disease and death.  (Fun!)  Perhaps it goes without saying that every time I am on my mat, I think about my illness, and specifically the toll it took on my physical being.  But this month’s theme is resonating particularly forcefully, as it is allowing me the opportunity to consider the inevitability and the value of struggle – and the foolishness of attempting to attain perfection.  I will never be “thankful” for my cancer.  But I will continually strive to retain the lessons it taught me about struggle.  I did not endure cancer’s wrath because of the strength of my spirit, no more than my friends who succumbed to the disease died because of the weakness of theirs.  That part of the equation is down to simple luck – good or bad.  But when cancer takes us through its torment, it is forcing us to confront life’s screaming imperfection. 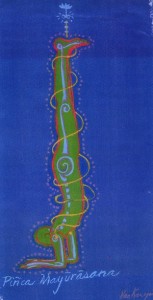 Yoga, like cancer, has taught me to embrace imperfection, and the power of struggle.  This morning, I continued my struggles – destined to be long, and perhaps never-ending –    with pincha mayurasana.  Each time I approach this forearm balance, I feel leaden, constricted, and certain I will break my neck.  But I keep at it, and hopefully, each time I approach it, I chip away at some of the fear that is holding me back.  As a child whose eyes may not yet have strained to find light in life’s darker recesses, our young friend from the climbing gym last weekend most likely doesn’t think about being on rope  – reaching, pushing, slipping, straining – as a metaphor for much of anything.  But the survivor in me will forever view physical challenge – on rope, on the mat, on pavement – as a reminder to embrace what is hard, and let go of imagined perfection.