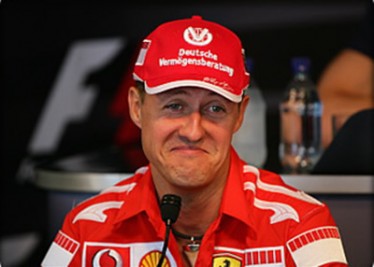 I just read a tweet by Lance Armstrong (who tweets way too much) about Michael Schumacher’s impending return to F1.  I don’t know how intense a fan Lance is; he seems pretty busy with other things (cycling, cancer, kids, lots of different girlfriends).  But even if Lance isn’t a diligent fan, he made an observation with which few could argue: ‘The greatest of all time!!’  When Lance is wasting his precious 140 characters on an extra exclamation point, you know there are strong feelings.

My purpose is not to debate whether the greatest is Clark, Fangio, Senna, or Schumacher.  That’s a debate for another day.  There is no question of Schumacher’s greatness, and his seven championships will never be equaled in F1.  That feat is an outrageous achievement that puts Michael in the rarified air of Michael Jordan, Tiger Woods, and maybe Lance Armstrong (Lance doesn’t win championships, he just wins that one race.  It’s a bitch of a race, but it’s still one race and not a championship.  Sorry).

What was it about Schumi?  How did he become so dominant?  I can’t offer a full answer, but I can’t help but make a few observations.  It is one thing to be a perfect driver – to be able to go around a race track (a real track, not an oval) 50 or 60 times and do it perfectly every time, reaching speeds in excess of 200 mph and finding the fastest way through every turn and every corner.  That feat is hard enough, but it is only a small part of the equation that equals success.

There is also the matter of physical ability.  Many don’t understand the athleticism that is necessary for F1.  Although the physical demands are far different (and far less) than those of, say, the Tour de France, drivers are subject to brutal conditions for a period of up to two hours.  The cockpit is hot enough in a temperate climate, but in venues such as Malaysia and Bahrain, exhaustion can easily set in.  That’s not exhaustion like being tired, that’s exhaustion like you’re sweating so much that, no matter how much water you drink, you can not hydrate, and then normal body function, motor control, vision and cognition start to break down.  That can lead to mistakes in a sport where mistakes can be deadly.  The drivers must be supreme athletes to compete and succeed.

But there is more, much more.  There is that intangible aspect of competitiveness that (pardon the pun) drives these men to another level.  Schumacher’s competitiveness was like nothing I’ve ever heard of.  He would lie, cheat and steal to win.  He was so tough that he simply could not be intimidated.  But he could dish it out like no one else in the history of the sport.  Sometimes it seemed that his purpose on the track was to scare his competitors into submission.  He was not above driving into other cars, literally causing accidents, if there was some advantage to be gained from such conduct.  The word ‘ruthless’ does no justice to Schumi.  He was the Terminator, Jaws, Darth Vader, and Alien, all rolled into one, unstoppable winning machine.

He loved his team and worked tirelessly off the track to help everyone help him win.  He didn’t do it to become popular and he didn’t do it to become rich.  He lives quietly in retirement and gives away untold millions to various charities, without any of the fanfare that accompanies giving by certain American celebrities.  He gave everything he had during his years in racing and had unheard of results.  He seems to have done it simply to do it, simply because he could.

And now, after two plus years of retirement, he will come back to take over the Ferrari seat vacated by the injured Filipe Massa.  He will race on August 23, 2009, at Valencia, Spain, at a circuit that is unfamiliar in a car that is unfamiliar.  But this is not like Michael Jordan or Lance Armstrong coming back.  This is not a false retirement where a sporting man finds he is unable to stay away from the arena where he was once so utterly and completely dominant.  Unlike those icons, Schumacher is at peace with his retirement.  He has never once threatened to return, and, even now, it appears he will only come back at the request of his beloved Scuderia Ferrari S.p.A.

Clearly Michael will be ready.  Even with testing bans, he will find a way to get to know this car and this course.  He will put every ounce of energy he has into this project because that is the only way he goes racing.  It is a moment, like so many others in F1 history, that is the stuff of legends.  The most revered and feared F1 driver alive and the most successful in the history of the sport will come to the aid of a flagging, though once, brilliant team.  He will race in the seat vacated by one of the most beloved and most talented young men in the sport.  Massa is the type of driver upon whom F1 should to build its future, if it hopes to have one.  Schumacher and Ferrari – two icons.

But Massa’s accident and the horribly tragic death of Henry Surtees in F2 reminds us, that even with all of the innovations and technology, this is still a perilously dangerous sport.  And all the romance and all the drama is only heightened by the fear and the horror that serious men, family men, put aside every time they get behind the wheel.  Viel Glück, Michael!