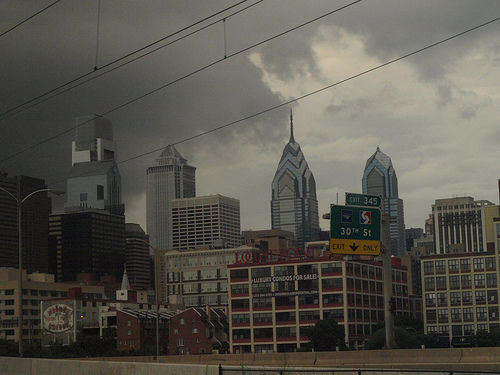 September 18 is the deadline for the doomsday budget known as Plan C.  If that goes into effect, as I’ve mentioned before, it will fundamentally change Philadelphia.  It will be the systematic dismantling of a large part of city government, along with about 3,000 layoffs, including 1,000 police officers.

There has been progress in Harisburg, and I continue to be optimistic that, at least in the short term, disaster can be averted.  I think it’s a good sign that everyone is upset – governor, mayor, unions – that’s the hallmark of a decent compromise.  the ball is still in Harrisburg’s court as the state legislature tries to reconcile different plans.

In the meantime, Philebrity has a compendium of the ominous letters that are starting to circulate about how the city is, to a large extent, getting ready to shut down.  *gulp*

Philadelphia, like many other cities, is going through a financial crisis.  As I’ve mentioned before, Mayor Michael Nutter has prepared a doomsday budget, ominously designated as ‘Plan C.’  This has been described as the dismantling of city government.  And while I can picture the nightmare that would follow the closing of all public libraries, the closing of the Fairmount Park Commission, the firing of about 1000 police officers, I can’t even begin to understand what is meant by the provision that states there will be no more funding for the city courts, no more funding for the District Attorney’s office and no more funding for the public defender.  How can a city function like that?

There is a remedy out there, but it has me scared in a different way.  The first aspect of the Mayor’s plan, which has to pass through the legislature in Harrisburg, is to raise the city sales tax by 1% (from 7% to 8%).  That’s a no-brainer from where I sit.  We need to do this to increase revenue so that the city can pay its bills as they come due.  Will there be a problem down the road with business development?  I’m willing to tough it out for the time being if it means that our streets will be safe and our courts will operate.

The second aspect of the Mayor’s remedy is a bit more troublesome.  Besides raising sales tax, the Mayor proposes to “restructure” the way that city pensions are managed.  Since it is still labor day, it seems like this is a good time to meditate on the proposal.

The current plan establishes a much lower cost approach to funding pensions of newer city employees (via 401k’s).  The new employees would get no choice in the matter; they’d simply be stuck with a crappier retirement package.

My initial feeling was that Plan C must be avoided, pretty much at all costs.  If new hires get screwed now, we’ll work on making it up to them later, right?  But today I met a guy who works for the city.  He’s in Behavioral Health, which means that he’s working to save certain of our city’s residents from the tragedy of addiction.  And since Philadelphia recently legalized gambling (slots ‘parlors’ now, but  there is clearly more to come), a new wave of addicts is expected by this guy’s department.

This man has 30-plus years in.  His pension is secure.  No one is proposing any changes that will harm the retirement he has worked so hard for and so richly deserves.  I asked him what he thought of the proposals coming out of the state legislature in comparison with the horror of Plan C.  He said that it shouldn’t pass because it kills collective bargaining.  This guy is a city resident, just like me.  The downside of the Mayor’s doomsday plan is going to hit him as hard as anyone else.  We live in a neighborhood where, in the last ten years, property values have gone way up – and he could lose all of that.  But on labor day (and I’m sure on every other day), he said that you can’t have two different sets of rules.  The new guys should get the same thing that he got and he’s ready to fight for it.

I don’t know what’s going to happen.  Plan C goes into effect on September 18, and the remedial measures have to be passed by both houses of the state legislature.  The version we have now – with the much desired sales tax increase and the much despised pension restructuring, has passed the Senate.  It will be opposed vigorously in the House – in the name of fairness to workers.

The Mayor says we are at a major crossroads and that hard choices and sacrifice are necessary.  Should labor be forced to bear the burden?

Harrisburg took a big step to letting the city raise sales tax and restructure (*shudder*) pension plan payments (assigning a portion of pensions for new employees to *ulp* 401k plans).  Plan C is still set to go into effect on September 18, effectively dismantling large portions of city government (including the Court system?).  The unions are not too psyched about the pension plans that will be avvailable for new employees, but its hard to see how we can quibble over details with so much on the line.  The revised bill HB 1828 now goes back to the House for another vote.  they’re still analyzing, but if we can get through that, we’re pretty much there and we can put Plan C back in the drawer.

What is unclear is whether this is just rearranging the deck chairs on the Titanic.  I know that the sales tax increase has some potential, but I also know there is a lot of fat in city government.  Maybe we don’t need to eliminate 3000 jobs, but we do need to do something.