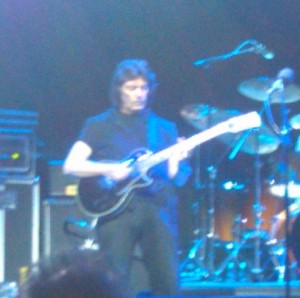 If you know me, you know that Gabriel-era Genesis is sort of where it all begins.  I’m not old enough to have seen the classic line-up, but when I finally discovered the genius of that quintet, well, that pretty much changed everything forever.  I’ve gone deep with Genesis, seeing the trio when possible, collecting every manner of album, bootleg and video, and going to see the amazing Musical Box tribute show countless times.

And my Prog Rock education and appreciation has just gone on and on.  I have recently opened my mind to extraordinary groups from Brazil, Sweden, Poland and other points across the globe.  I have gotten to know bands old and new, finding music that is uplifting, challenging and extraordinary.  So much of what I love about all the music I have discovered is that it relates back to that wondrous moment when Messrs. Banks, Collins, Gabriel, Hackett, and Rutherford brought forth the beauty of The Musical Box, Foxtrot, Selling England By The Pound and The Lamb Lies Down On Broadway.  It was no coincidence that those selections had such a profound impact on me.

So, among the first-generation proggers, I’ve been pretty lucky to see the reunions and comebacks of Yes, King Crimson, ELP and even Genesis.  But Hackett, long exiled from the group he helped make famous, does more to keep that original spirit of innovation and irreverence alive than all the rest.  When I found that his only area performance would be at Nearfest 2010, I pounced on the opportunity and grabbed very good seats.

I had long known of Nearfest, but never mustered the strength or inclination to spend the better part of an entire weekend in nearby Bethlehem, PA watching a lot of prog with which I was wholly unfamiliar.  Thanks to the miracle of social networking, I got more info and encouragement than ever to make Nearfest happen this year, but in the end, I only sprung for Friday night, electing to, once again, pass on the vast majority of music and fellowship that makes up the weekend.

I would have let the whole thing pass me by (again), had it not been for the encouragement of my spiritual music guide, my teacher, my long-lost big brother: Cousin Steve.  He played a rather large role in the whole Genesis thing taking shape for me, and though we’ve seen Hackett before, he was not about to let this opportunity pass.  Thanks to Steve (who had never been either), I got my first taste of Nearfest.  And now, a few days later, I am comfortable in the firm belief that it will not be my last.

Lehigh University is a beautiful setting and the Zoellner Arts Center is the Perfect theater.  We arrived in plenty of time to see Riverside (a phenomenal Polish band I have followed for a few years, but never seen live), but I locked my keys in the trunk just as we were heading over to the theater.  The Lehigh security department was understanding, kind and efficient in helping me put that brain cramp in the rearview mirror and Steve and I took our seats in the fifth row center after only missing a couple songs.

Riverside was tremendous.  They lean more toward the prog-metal end of the spectrum, with a dash of Porcupine Tree thrown in for good measure.  But after seeing Dream Theater last summer, I really appreciated Riverside’s more deliberate approach.  The emphasis was less on individual pyrotechnics and more on creating a dramatic musical experience.  I was thrilled.

We then got a nice long break to kibbitz with our fellow proggers.  Serge Morissette (artistic director of The Musical Box) was present and in good spirits until he saw my Transatlantic shirt.  He missed the gig in his home town of Montreal on account of being in Europe during the eruption of a certain Icelandic volcano.  He was delighted, however to chat us up about his groups latest doings (their version of The Lamb may be coming back!) and we even shared a few laughs about Mr. Hackett’s personal difficulties.  Serge said that Hackett’s (now) ex-wife would now be changing her name from Kim Poor to Kim Rich.

Serge’s good nature and attitude was emblematic of every soul we encountered on Friday night.  Everyone was happy and willing to share a story as we bonded over this music we share and love.  I finally understand why people have been telling me to just do it.

So after this lovely experience in this beautiful place, Steve and I walked back into the theater to see Hackett – the original, the real thing.  And, of course, he did not disappoint.  It was a full set, with such surprises as Carpet Crawlers, Slogans, and Ace of Wands thrown in to the crowd’s delight.

So I’ve had my taste of Nearfest.  I get it.  Next year, even if I have to go solo, I’ll be there.  And I’ll look forward to seeing all those beautiful folks who come from far and wide to enjoy the greatest music ever composed.