From the new interview with Guitar World:

You can get a haircut, you can go shopping for the proper shoes, but you really can’t make your music better unless you work on it. 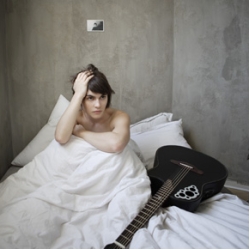 I became acquainted with this artist by means of a Synthopia post that featured Ms. King trying out the new Moog guitar.  I was impressed with the instrument and the artist’s unique approach – fingerpicking, percussive hits and ethereal phrasing and composition.  A little research revealed that Ms. King had a prior YouTube hit with “Playing With Pink Noise“.  This showed off her Michael Hedges-esque chops.  Having seen Hedges open up for Leo Kottke in the late 80’s and being rather surprised at his unorthodox approach, I found Pink Noise to be nothing too special.

But then I got to know King’s then (and still) current release, Junior.  This features electric compositions and full band treatment for King’s unique talents.  It’s a stupendous record and the first track even features audio samples from The Prisoner television series.  If you want to get me weak in the knees real fast, that’s a good strategy.

So, I was thrilled to have an opportunity to finally see Ms. King in concert last night at the World Cafe Live.  The opening act was Joe Robinson, who, at the tender age of 18, has achieved a prodigious mastery of the 6-string acoustic guitar.  Again, we were treated to a lot of the classic Michael Hedges approach.  This was a bit incongruous, since Robinson was merely six years of age when Hedges died in a car accident.  And, of course, Mr. Robinson was not even alive when I saw Hedges open for Kottke.  While Robinson’s haircut and tender good looks can’t help but make one think of Justin Bieber, his utter domination of his instrument was extraordinary to watch, but also off-putting.  So much of it was saying “look at mee!!  Look at all the amazing things I can do on guitar!”  The effect was generally intolerable.

Which brings us to the evening’s feature presentation.  I noted with disappointment that Ms. King would not be accompanied by a band for this concert.  After the grating annoyance of the opening act, I steeled myself for an additional let-down.  Fortunately, I could not have been more wrong.

What followed was one of the most introspective and heartfelt performances this side of a Frippertronics exhibition.  King, despite her monumental talent and commitment to her craft, did not echo her opening act’s bombastic dominion.  In fact, the only similarity between the two was that they both played a stringed, acoustic instrument.

By contrast, King interacted with her numerous guitars, seeming to search and find her compositions lurking within.  I was reminded (I swear to god) of the incomplete sculptures of Michelangelo, beautiful human forms emerging from jagged marble.  She sang only two songs for the entire performance and focused the remainder the evening on her searching and delicate compositions.  This is not an experience that could be approximated with a bootleg or a live album.  It was absolutely essential to be in the performance space to hear every scrape of the strings and to see the artist move silently into the trance of the moment.  King channeled her audience’s excitement and attentiveness into a very raw energy that was focused completely on her interaction with the instrument.  There was no dancing about, no clever asides or quotes contained within the music (an appalling strategy employed by too many virtuosos, including the opening act and, sadly, Mr. Hedges himself).

I felt honored to be part of King’s process last night.  In addition to her beloved Ovation Adamas, she showcased a variety of bizarre variations, including a miniature 12-string, a dobro/banjo combination, a harp guitar for her version of Hedges “Because It’s There” and a 7-string nylon with fanned frets, among others.  Between songs King claimed to be still familiarizing herself with the techniques required to manage these musical monstrosities.

So there we all were, in one space of quite contemplation and musical ecstasy where, as Fripp likes to say, the music begins to play the musician and life becomes most real.  It was an enormously effective and moving experience for me.

Please pay special attention to the SHREDDING that occurs around 1:18.  This video is what introduced me to this artist.  Like, three weeks ago.