Or GoogleWe, if the “Us” might get confused with U.S., thus making the product/platform seem a bit too American.

Now then, what the fuck am I doing up at 4:18AM dreaming about Google’s Facebook competitor? I can’t even blame this one on the dog.  She is blissfully passed out at the foot of the bed.  No, this one us all me.

Anyway, Google should not have let Apple get hold of Lala.   That platform had such amazing, untapped potential.  Now it’s just dead.   I continue to be amazed at how people can stare at Blip.fm all day.  Google could have had their social network built around music and modeled after Blip, if they had only grabbed Lala.  As far as I know, Google wasn’t even interested.

And now, with GoogleMe (whatever that is), they will invariably bite off more than they can chew by trying to catch up too much ground all at once.  Sad, really.   Oh well, I guess they can afford another failure.

Here’s what I would do.

Start with Gmail.  Everyone (almost) already has an account and contacts (potential friends).  Next, make it a completely separated interface.   One of Buzz’s great failure us that us showed up in EVERYONE’S Gmail, whether they wanted it or not.

So, first question, “Do you want to join GoogleUs?”   And your gmail address us already in the box; just enter your password and we’ll get started.

Next, “Here are your Google Contacts.  Who among these contacts do you want to add to your GoogleUs?”.  Check ’em off and send ’em invites. If they are already on GoogleUs, it’s friend request.  Next.

This is where it gets tricky, but also fun. Right now, the name of the game is games. But instead of Farmville or Mafia Wars, GoogleUs will give you the chance to immediately dive into a Blip-like environment.  And not just with music.  At the outset, there should be a separate “neighborhood” for a few broad interests: music, sports, travel, literature, comics, movies, etc.  And, to get things rolling, Google should not start too big.  My strategy would be to purchase Blip.fm and Flixster right off the bat and use those good, existing platforms to begin the project.

I find the movies aspect especially exciting.  We already know how the Blip architecture works for music: listen to a song (blip it), find others who have blipped that song, become “friends” exchange “props”, win badges, tweet blips, etc. etc.

With movies, you can’t watch the entire feature, but with the power of YouTube already under Google’s tent, friends could exchange scenes and trailers which are already available.  Then, based on an exchange of props, users win badges and are entitled to other perks.

Picture this same, community-building, yet quasi-competitive, model spread across numerous genres, enthusiasm and pursuits.  Yardbarker sort of has this set up for sports.  Epicurious has a lot of data for food.

Another thought is a neighborhood called “reunion” or some stupid shit like that.  Google Reunion would be the real answer to Facebook – specifically a place to connect where family and friends and just do all the inane stuff people do on Facebook.  This is where you could enter as much or little information about yourself and Google will help you find, and be found by, your long lost relations (whoopee).

All these neighborhoods are then oriented around a user’s central hub.  For each friend, the user will choose which neighborhood feeds from which friends will show up in the timeline of the central hub.  For example: Say old Uncle Mpomy is really into prog rock, like crazy into it.  You don’t want to see that.  So don’t check Mpomy’s “music” feed.  But he is, after all, your uncle, and when he posts pictures of his basset hound, well, you would like to see that.  That’s the friends & family feed.  So that one gets a check.  And if you’re both Phillies fans, then you check the sports feed also.  All that will then appear in your central hub.

So, of course none of this is going to happen.  Google is a company of engineers and they know better than to listen to someone who uses social media about what a social network should look like.  I only dreamed this thing up because it’s how I would like all my stuff integrated.  But none of that matters to Google.  Wave was a brilliant piece if engineering, but it was an horrendous application.  No one knew what to do with it.  No matter how amazing the application, if it doesn’t do anything (fun), then it will not be successful.

Drew Olanoff got it right when he said that Facebook is not a website, it’s an OS.  Google should start at the end, like the trial lawyers who start with their closing arguments.  What do people want to do?  What’s fun?  What websites and apps do people become drawn into and can’t stop looking at?  Once they answer those questions, they need to build a platform that will run those answers, in integrated harmony.  There is no way it’s going to happen, but I think it would be nice.

It doesn’t matter who the author really is, just as long as you like the books.

Eloquent recommendations for your media consumption.

The issue of privacy has been much on my mind, especially after finishing Ken Auletta‘s fine new book about the monster from Mountain View.  Matthew Ingram gets you up to date on the Google convection in Italy and the fact that Google IS a media company.  And Danah Boyd reports from Harvard about evolving privacy norms in the context of teens using Facebook.  Let me put it this way: fifteen years ago, if you knew someone was opening, reading, and analyzing all your mail, would that have been OK with you?  But now you don’t mind?  The world is changing and so are you. 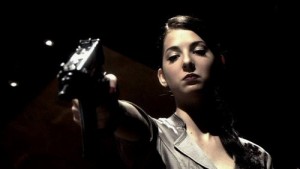 (SPOILER ALERT for links only)  Finally, Tamara from Caprica looks like a total bad-ass with her sub-machine gun because she IS a total bad-ass.  Annalee Newitz knows how good the show is.  Are you watching the best show on television?

They’re doing a decent job of pumping up Android: