My love of music has caused my 250GB hard drive to be pretty much full-up after just two years.  I’m looking to conserve space wherever I can.  All extraneous bullshit has to go.  After a visit from le Sturgeon last weekend (which included a massive-music-trade-a-thon), I’m playing with a scant 4GB margin.  That’s the danger zone.

This morning I looked in the ‘Application Support’ folder under garageband and confirmed that there were an extra 6GB of Demo Songs just sitting there doing nothing.  I guess these might be helpful if the computer is sitting in the showroom and you want to show off all the cool sounds GarageBand can make, but that shit has no place on THIS machine as it is currently configured.  Adios, demo songs.  I hope the artists were properly compensated. 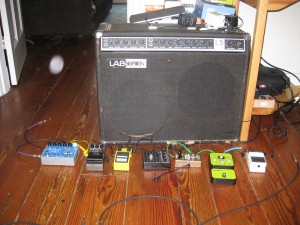 What you see above is still, in my opinion, the best way to do this.  Those pedals, in that order, with that amplifier, provide enough sonic options for me to do pretty much anything I want to with an electric guitar.  There’ a lot I’m not capable of, in terms of both technique and technology, but right now my focus is on documenting what I can do, instead of encroaching into the territory of what I can’t.  Quite simply, i want to be able to come home, plug a guitar into that set-up, and, should the moment so strike me, press the record button and have a document of that evening’s inspiration.

Now, of course I have the capacity to do just that with the present technology.  Even if I don’t want to set up the computer and the A/D converter and Logic (or even GarageBand), I can just do like FBdN and record right to iPhone OS.  Or I could use the old minidisc.  I could even go right to an old cassette multi-track.

The problem is TIME.

Not that these things take time, but rather that I want to be able to take whatever I’m doing and bring it back into a digital audio workstation later.  That’s no problem, unless there are going to be loops.  And there are always loops.  If a song sketch is off by even a tenth of a second, that means that after a minute, the deviation is 6 seconds – that’s not music, that’s chaos.

So the question now is: how can I get a master clock associated with an impromptu recording of a song sketch?  Playing along with a metronome is not enough.  Whatever device records the initial jam has to associate a bpm with that snippet, which can then control other music.  I’m not sure this is possible.

The more sensible approach would be to take the impromptu performance as inspiration and then properly construct music around that, starting with the beat and locking in the time.  Of course, this means recreating that moment of creativity in a very sterile setting.  Much less fun and much more time consuming.

All of this would be a piece of cake if I (a) had no day job and (b) were fabulously wealthy. 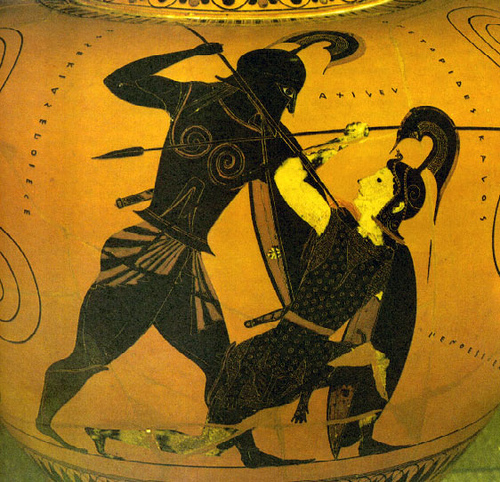 This is Hector and Achilles, composed, arranged, mixed and recorded in about two and one half hours.  It’s GarageBand with the gutar recorded via microphone through LabSeries solid state amplifier.  the guitar is an early 70’s SG with strings that need to be changed.  Some of the sounds were jacked from GarageBand extension packs obtained through bittorrent.

I have to thank Andrew for this – he gets a co-writing credit for coming up with the idea of a collaborative Garageband blog that would allow us to upload projects that others could then access and augment. Unfortunately, even slight variations is garageband versions and plug-ins is proving to create a huge compatibility problem. The way to do this would be to have all the software, as well as the gui, the file storage and everything online. Just log in from a current browser and get to work. As far as I know, this model has not yet been implemented, but I really haven’t checked thoroughly.

Before my bubble was burst, however, Andrew got me so excited with the idea that I quickly jotted down the first tow things that came into my head and smooshed them together. When is a grooving bass-drum-organ loop where I got to use the Axiom 25 keys to control whatever instrument samples I landed on first. They were ‘Prog Rock Bass’ (of course) and ‘Soul Organ’. I fluctuated back and forth between to similar drum loops to get a more human feel.

The other bit is missing bass in exchange for a very low ‘Laser Beam’ midi instrument played on the Axiom. It’ basically a lot of noise and cacophony leading up to a big classic rock rhythm. The first part then repeats and fades. My thought was that these two spur-of-the-moment ideas would get reviewed and dismantled by a dozen other curious musicians, or at least Andrew. The title is a combination of our initials, and this version (hopefully far from the last) is a bit more gussied-up with sound effects and automation. I don’t know what’s coming next.

I’ve got loops, I’ve got live guitar; I’ve got midi controller, I’m outta control!! The question is whether to just muck about, try to record one of my songs or if I’m going to start with guitar or start with lops or what. I’ve got four little projects going and I’ll post whatever gets done first. This is fun!