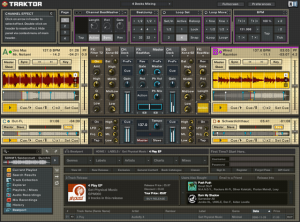 Ah the mix-tape.  Am I still in high school?  College?  Trying desperately to get the attention of a lovely young lady who barely knows I exist?  I know!  A mixtape!  My unaprralleled knowledge of music will instantly win her over and we’ll live happily ever after.  All my fears of rejection will be extinguished even before the auto-reverse mechanism clicks over to the second 45 minutes of aural bliss.

Actually, my ‘mixtape’ fantasy worked once.  A tape I made caused two people to fall madly in love and get married.  The only problem was that I was not one of them.  That’s a story for another time.  But a recent release of crazy cool Brazilian music made me rethink the whole DJ thing, but this time in a slightly different light.  The record is Gilles Peterson – Brazilika, and I guess if I had grown up in the UK, I might have a better of who Gilles Peterson is and why i should care about his music.  It’s amazing to me that there’s a DJ in the UK, over 40 years old, who can release a relevant compilation of music.  Would that happen in this country?  Anyway, the record is great, introduced me to Azymuth, whose early stuff seems vey much ‘up my alley’, and is a nice listen straight through.

But, of course, I got to thinking – ‘I could do that.  Better.’  Of course.  So, the thinkg before was starting with an abstract idea of making everything happen all at once – past-present-future all mixed on to one glorious track.  Looking back on that post from the past, it’s little wonder I didn’t follow-through on the project.  So now, after delighting to the treasures in Mr. Peterson’s vault, I’m thinking of going back to my virtual decks, looking into some of the more obscure corners of my record collection and – mixtape.  Something of a glossy sampler to be released through Blogerantz.  Maybe some post-production and a fancy bit of art, but still really just a mixtape.

I am working on a slightly different kind of legal filing, and after the weekend retreat and with today’s wretched weather, I am prone to distraction.  Sometimes the best thing to do is just put iTunes on to shuffle all 11,000+ songs and get to work.  The volume is kept low, but it’s a relaxing background, like the sound of my own blood flowing through my viens.

Once in a while iTunes gets cute and pretends to be a DJ.  That just happened with The Beatles ‘Because’ from the Love remix flowing right into the old, original chants that introduce ‘Biko’, the last song on Peter Gabriel’s third, or Melt, release.

The idea is not to get a gig at a party or start doing weddings and bar/bat mitzvot. Instead, I want to assemble a few minutes worth of music so that I’m listening to everything in a single moment. this was from an idea in the Alan Moore documentary about why he thought Watchmen (the comic) was special. Past, present and future are all happening simultaneously. I’ve got my hands on some software. Now there’s the learning curve, which could be steep, considering my lack of time to commit to the project. But here goes nothing!

For some reason, I want to be a DJ. DJ software is so cool looking and I idolize Amon Tobin and Squarepusher – but it’s not happening. How many parties am I even going to, let alone providing entertainment?

My back ache is mostly gone, thank jeebus. There’s nothing on the calendar tomorrow, so it’s a good catch-up day. I have had Court appointments in Camden the past three weekdays, so it’ll be nice not to run over there again. Arb today was mediocre, but it’s non-binding. I don’t think there’s going to be an offer of settlement in that case.

Time for some more uploads!